Welcome to Cypress Community Garden, an Award-winning grassroots initiative located along THE ARBUTUS GREENWAY in the heart of Kitsilano, Vancouver.

The community garden provides much needed green space in the area.

Diverse flowers, shrubs and vegetables serve to attract birds (we have a Bird Garden at the east end of our site), and the Perennial garden at the west end is filled with butterflies and hums with several types of bees from spring to fall. The Arbutus Greenway is an important home for the Mason Bee.

Community gardens are important social and educational spaces that serve as dynamic catalysts in terms of fostering pride in community. Vancouver residents of all ages and many international tourists visit the gardens to learn about organic gardening, and to relax in the public areas.

Since the mid 1990’s Cypress Community gardeners have tended this block-long area that originally bordered the train tracks and right of way of CP Rail. Garbage clean-up by garden volunteers along with grass cutting and plantings created a vibrant  walkable green space that earned us the “Most Beautiful Community Garden Award” in 1999. 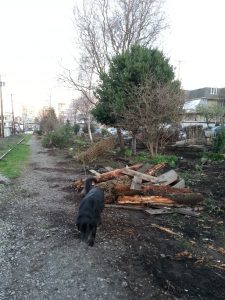 The garden had to rebuild after the destruction in 2015 of trees, fences, water lines, rockeries and vegetable boxes. (See the pictures and related video on CP Rail’s dramatic clearing of its right of way at Cypress and Maple Gardens by going to the Menu on the left and choosing : HISTORY: FROM THE ARBUTUS CORRIDOR TO THE CITY’S GREENWAY).  Gardeners rallied quickly to clean up and community spirit kicked in. Over the next year, our members removed broken wood and pavers, re-planted perennials and shrubs, and re-built vegetable boxes inside rapidly constructed new fences. 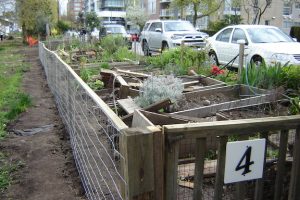 Rapid Rebuild in April of 2015

The result is that once again we’re a popular city and neighbourhood green space and a favourite for those using the Arbutus Greenway that the City of Vancouver has created along the former Arbutus Corridor and CP Rail tracks.